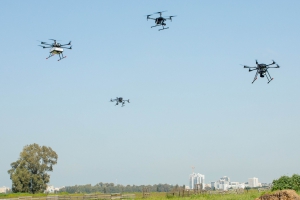 The Israel Innovation Authority, the Israel Ministry of Transport (through Ayalon Highways Co.), The Civil Aviation Authority of Israel (CAAI) and The Smart Mobility Initiative at The Israel Prime Minister’s Office are delighted to present a first-of-its-kind pilot: The State of Israel has achieved significant progress over the last year in shaping the future of mobility, introducing a national drone network that will primarily enable cargo transportation in urban areas through smart and innovative airspace management. During this first-of-its-kind pilot, a large number of drones operated by several companies will fly over the city of Hadera. Those sorties will be managed by one centralized, autonomous Unmanned Aircraft System Traffic Management (UTM) located in the traffic and air traffic control centers of the Ayalon Highway Company in the central Haifa Bay.

The drones flying in the demonstration will perform about 300 sorties a day. Each drone will be simulating the execution of various types of tasks and operations: food delivery, transporting medicine and medical equipment, agricultural services and many others.

The flights are being carried out by five different companies (listed below). About 20 drones are expected to fly simultaneously, and hundreds of others are scheduled to fly in various demonstrations over a two-week period. This is the first such demonstration in Israel out of a series of eight planned to take place over the next two years. This is a significant global breakthrough in the ability to manage drone operations at scale, which will lay the foundation for future national drone operations in many areas. To support the current phase of the pilot, the participating companies have been granted funds by the Israel Innovation Authority, as part of the Innovation Authority Piloting Fund Program.

Since March 2020, the Israel C4IR Center at the Israel Innovation Authority, in cooperation with the Israel Ministry of Transport (through the Ayalon Highways Company) and the Civil Aviation Authority of Israel, and a number of other entities, have been working to promote the use of drone delivery as a service, as part of the NAAMA Initiative (a Hebrew acronym for Urban Aerial Transport). The project was established to enable drones to be deployed for the public good, ultimately reducing congestion on public roads, transporting medicine and medical equipment and performing medical tasks, delivering various commercial goods more quickly, and enabling Urban Air Mobility (UAM) to function at scale in the future. During this time, the NAAMA Initiative involved many local, international, public, and private stakeholders to enable technological breakthroughs while removing regulatory barriers and enabling Israel to become a “beta-site” for drone piloting and operations.

ITAMAR BEN MEIR, CEO OF AYALON HIGHWAYS: “A smart traffic management and air traffic control center that manages and prioritizes a number of drones flying simultaneously in one geographic airspace is a remarkable achievement, setting the stage for the future of mobility applications, a field in which Ayalon Highways is primed to play a leading role. This demonstration is part of a long list of technological and regulatory developments required for the commercial operation of a national low-altitude air traffic network for drones in urban settings.”

AMI APPELBAUM, CHAIRMAN OF THE ISRAEL INNOVATION AUTHORITY: “One of the Israel Innovation Authority’s most important goals is to harness Israeli technology and innovation in a way that will make a positive impact on the Israeli population. Until a year ago, when the NAAMA Initiative was established, transporting cargo and delivering medical equipment by drones would have seemed like a distant dream; today, it is becoming a reality. Demonstrations of simultaneous flights of dozens of drones over Hadera, managed by the control center in Haifa, are an unprecedented leap forward for the State of Israel – a monumental step towards a future of smart transportation, in which Israel is becoming one of the first countries worldwide to enable aerial cargo transport via drones.”

The following companies are participating in the demonstration (more information upon request):

About the NAAMA Initiative:

In early 2020, a government steering committee was established to support and promote a national drone network operation under the name “the NAAMA Initiative” (a Hebrew acronym for urban aerial transport). The project is supported by the Civil Aviation Authority of Israel (CAAI), the Center for the Fourth Industrial Revolution of Israel (C4IR Israel) under the World Economic Forum, the Israel Innovation Authority, the Ayalon Highways Co., and the Fuel Choices and Smart Mobility Initiative in the Israel Prime Minister’s Office. The project is the result of the realization that promoting drone operations in Israel requires the creation of a suitable regulatory environment via ongoing dialogue between the initiative’s partners, regulatory bodies (CAAI) and industry. The initiative promotes the establishment of a national aerial network and the legislative framework required to operate drones for commercial use. During the past year, over 700 sorties were performed – mostly to support the health system in dealing with challenges exacerbated by the coronavirus pandemic.