This is first of its kind and is the most advanced system that guarantees complete “Water Shield” disinfection & purification performance. By using grid power free Ozone based technology, the NanoBlue system effectively removes viruses, bacteria, cysts, arsenic 3%5, lead, mercury, iron, odor and chlorine. 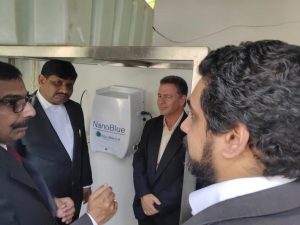 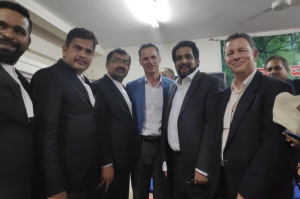 Shri. Bhat in his speech, appreciated the efforts made by Mr. Ranganath, the President of Advocates’ Association, Bengaluru in setting up the Unit.  He also praised Israel for its water technologies. 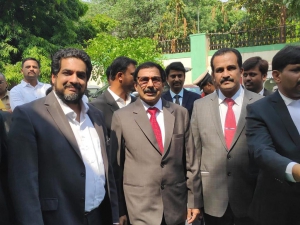 Mr. Bradley Reid, CEO-APAC RWC, commented that “the partnership which has developed between  Aquallence division and the Authorities associated with the provision of safe drinking water to the communities in Bangalore is momentous. Particularly so, as it is bringing innovative water treatment, in a cost effective and technically sustainable package to the community. RWC looks forward to developing these partnerships into the future to continue to improve water quality and supply options to the community at large.” 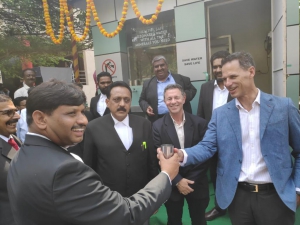 Dr. Shai Moses, Consul for Trade and Economic Affairs, Consulate commented, “the Israeli Aquallence Water disinfection & purification system official launch in the City Civil Court compound of Bangalore will be the first water kiosk which will provide safe drinking water to the public who crowd the City Civil Court and this is of great value to the entire community. The move is very encouraging.  Aquallence is providing cost-effective and long lasting water service.  It also portrays the close Indo-Israel relations especially with the Government of Karnataka”.

We use cookies to ensure that we give you the best experience on our website. If you continue to use this site we will assume that you are happy with it.OkPrivacy policy