Earlier this month, Mr. Sagi Itcher, Commercial Attache, Trade and Economic Mission of Israel in Mumbai along with the Consul General, Mr. Ya’akov Finklestein had the pleasure of meeting the  Honorable State Agriculture Minister, Shri Dadaji Bhuse, and Shri Sandipanrao Bhumre, Horticulture Minister of Maharashtra. As we are aware, Maharashtra tops the list in the production and export of various fruits and vegetables in India. It was enlightening to know of the various initiatives being taken up by the Government of Maharashtra to amplify this production using various techniques that are not primitive but in fact quite advanced in nature. 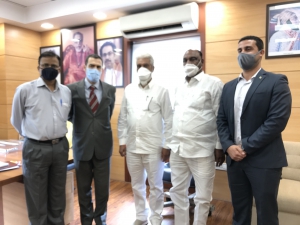 Talking about the modern techniques in agriculture, the Indo-Israel collaboration in the agriculture field goes a long way. The first stage of the Indo-Israeli Agricultural Cooperation Project started in 2008 following the signing of a three-year Action Plan based on a Government to Government Agreement. Within the framework of the plan, Israel was requested to share best practices and know-how and provide capacity building through professional training programs to be conducted both in Israel and in India.  The Centres of Excellence for Agriculture were set up under this in various states across India, including Maharashtra. The centers in Maharashtra deal in a lot of different produce such as pomegranate, varieties of mangoes, citrus fruits, etc. Farmers in Maharashtra, both small and large farm holdings, have benefitted a lot from these practical know-how centers.

The meeting between the Israeli diplomats and the State government officials further enhanced this long-term relationship between the two countries. It also apprised everyone regarding the varied schemes that the government of Maharashtra has been coming up with in order to support and help local farmers grow.  Digitization in farming is another arena being explored by the Government of Maharashtra, wherein Israeli inputs could be beneficial. We hope this ongoing productive collaboration between the two countries will further impact many lives.