On Thursday and Friday November  26TH & 27TH 2020, the Israel Economic Mission to Kenya visited Embu County and below is a summary of the visit.

The program started at 8:30 a.m. at Country view hotel on Thursday 26TH whereby the host team met the Israel Economic Mission Visitors and welcomed them to Embu County. This was done by Dr. Jamleck Muturi and Mr. Simon Kariuki.

A brief of the county was given:

The team was informed that the county has three main Agro Ecological Zones which depend on rain fed Agriculture; The upper part (tea and coffee & dairy zone), Middle (maize & coffee) and Semi-arid zone (sorghum, millet & green grams). The CEC also highlighted that the major value chains in the county included: Tea, Coffee, Macadamia, Bananas, Mangoes, Green grams, dairy and poultry.  He added that Israel can assist the county realize its full potential in terms of technologies of water conservation for ensuring minimum wastage. The county had partnered with coffee factories and come up with Embu County Coffee Mill.

On his part, the head of economic mission for Israel thanked the county team for their elaborate brief and lauded the effort to involve youth and also the University of Embu Partnership.

After the briefing session, the tour around the planned sites began.

The team led by Dr. Jamleck Muturi visited this site and got the following report. 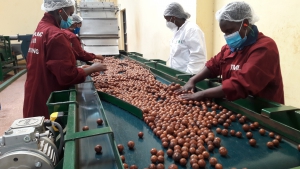 ited mandate is to source Macadamia from local farmers high quality nutritious nuts that are then processed, packaged and distributed globally. As the needs and expectations of stake holders have grown, so have the organizational capacities and expectations. Tropical Mac EPZ limited, is set to launch its operations in February, 2021 upon completion of construction and installation of plant, equipment and machineries. The processing capacity of the factory is 1024 metric tons annually (kernel basis).

Embu county is the leading producer of Macadamia nuts in Kenya, which earns farmers an estimated Sh.260 million annually. The nut crop also makes about 66 per cent of the total value of the horticulture sub sector in the country.

The team was welcomed by the university Vice Chancellor Professor Daniel Mugendi. This was followed by a session of introduction of both teams. Then the team was taken through the institution’s brief;

The VC thanked the Israel Economic Mission Head for visiting the university as well as the CEC for considering the institution on the same. He added that the institution looked forward to collaborate more with Israel. 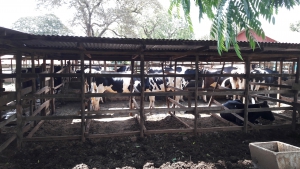 Thanked all for wonderful collaboration. He pointed out the main purpose of the visit as to form strong and flexible bridge between Kenya and Israel Economies. He noted that the collaboration would not have been established without the aggressive, proactive engagement from Embu County especially with the Dr. Jamleck Muturi. He noted that the county had a clear vision of activities, distinctive plans and very good collaboration. January 2021 there would be an Embu- Israel Trade Fair to show case technologies related to agriculture and others hosted by University of Embu.

The team was received by the CEO Mr. Kanambiu who after being briefed on the purpose of visit and team introduction gave a brief of the coffee mill and also took the team around the facility.

Embu County was recognized globally for good quality. The kernel was good for making cascara tea. The varieties grown mainly were SL28 and SL34 and were famous for citrusy, wild honey and lemon grass flavors. Once the produce is delivered to the factory it undergoes a series of processes; Weighing Record office, Parchment section, Weighing and bagging, Coffee sampling, Roasting and Coffee milling. 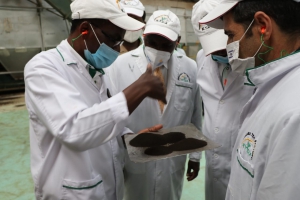 The team was welcomed by the company chairman and directors and other factory staff. After both teams introduction they were given the purpose of visit. Later a report was given by the factory team as follows;

Mungania tea Factory Company limited was built in 1972 and commissioned on 6th February 1973 for manufacture of green tea as Kenya maruzen. In 1979, the green tea production was stopped and Kenya maruzen sold the factory to the then Kenya tea development authority, on behalf of the tea farmers in the area.  The processing machinery for green tea was removed and those of black ctc tea manufacture installed. The factory reopened for black CTC Tea manufacture in 1980.

After lengthy discussions and tour of the factory the chairman thanked the visitors for visiting the factory and the CEC Agriculture thanked the factory directors and management for cooperation, sharing and even for being open to more learning. 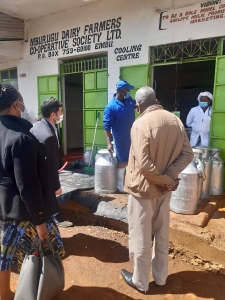 Mburugu Dairy Farmers Co-operative Society started in august 2011 as Kiriari Self Help Group. Over the years, the co-operative has expanded to a total of 2874 registered members in October 2020 and collecting 9,200 litres per day. The co-operative also owns three milk coolers donated by the National government department of livestock production with a total capacity of 11,400 liters, three standby generators, a 500 liter capacity milk pasteurizer, a milk dispenser and an inputs store that serves members with feeds and mineral supplements on credit.

The visit ended with appreciation of the visitors by the cooperative chairman at the group’s site for feed formulation which was still under construction on a 1 ¼ acre plot which sits on a different plot of land away from the dairy cooperative milk collection premise.

The team met the chairman Mr. John Ngari and learnt the following on the project.

Later the team visited a private special school in Kiambere ward whose concerns were:

The team concluded the visits at 4.00 p.m. and later thanked the guests from Israel embassy and saw them off to Nairobi. The team agreed to continue planning for the up coming Embu- Israel trade fair to be held in the county early next year.