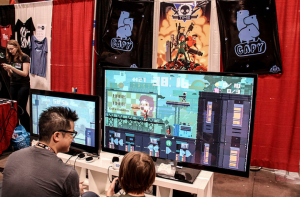 The video games industry is much more than just fun and games. It has grown to be a cultural and economic boom and has outpaced the growth of other established modes of entertainment, such as film and music, across many regions. The industry has long evolved beyond the stereotypical image of a pastime reserved for teenage boys, having advanced technologically in leaps and bounds, and pushed in new value chains and business models. Its expansion to multiple forms of digital devices and platforms, ranging from Mobile to PC, diverse genres, and cross-industry applications has reshaped both the industry and the demographics of its consumers, as it grew to become an integral part of modern-day society.

The overall industry, in terms of game platforms, can be broadly divided into three major segments: TV/Console, PC, and Mobile, with a fourth emerging segment representing new technologies such as Virtual/Augmented reality and streaming devices. The relative newcomer, Mobile has taken the lead over the more traditional console and PC segments. Driven by consumers seeking low-cost and portable gaming options, its share of the market is expected to continue to steadily increase in the coming years.

Ilyon – Ilyon is a mobile games developer and publisher of casual games. The company’s growing library of over 60 Free-to play casual mobile gaming titles, such as Bubble Shooter and Cookie Crush, has yielded Ilyon 30-50% growth each month since January 2016 and is expanding into card games and the world of celebrity gaming apps. In 2017 the company reached 100 million downloads of its titles and teamed up with Hard Rock International to create the official Hard Rock mobile game.

JoyTunes – JoyTunes develops interactive video games for learning musical instruments for adults and children, making it possible for anyone to learn to play a musical instrument. With more than 7 million users worldwide and 1 million songs played every week, JoyTunes has gained international recognition winning numerous awards.

Moonactive – Moon Active is a game development company specializing in iOS, Android, and Facebook games. The company develops hyper-realistic, cross-platform mobile games with a data-driven approach. Moon Active has developed five games since its inception. The company’s games have been installed over 10 million times, are distributed in over 150 countries and all include a heavy emphasis on social gaming mechanics. The company has developed proprietary technology, including its own in-house gaming infrastructure, machine learning-based gameplay technology, and in-game personalization mechanics.

Funtomic– Funtomic develops and operates a number of leading gaming portals, serving over 20 million gamers who play at the company’s websites every month. Starting out as a web portal for hosting games and successfully accumulating an audience of millions, the company decided to utilize its platform to develop its own games and distribute those of other developers.

Gavra Games – Gavra Games is a cross-platform game development studio, using our unique sense of humor to create “Easy to learn – Hard to master” games for our worldwide players to PC And mobile.