Taking the Giant Leap for Mankind

Space Infrastructure is not a new concept. Bell Labs is credited for launching the first commercial satellite for communications purposes all the way back in 1962. However, the focus of the Space Race for the United States from the 1960s through the 1980s had always been policy and values based: to shore up domestic defense capabilities, defeat communism abroad, and propel humanity to the “final frontier”.

As we move through decades, we can see a significant shift towards commercialization, due to new players and goals for the industry.

Through these policies and mission-oriented government programs, the United States developed GPS technology, the ARPANET (later becoming the Internet we know and love), and largely built technology to aid and assist these two central technologies. GPS and Internet tech are the foundational technologies of the 21st Century – it shows that government initiative in frontier tech is extremely forward-looking and long-lasting.

But what happens when the government stops initiating new ideas?

Governments around the world were satisfied with these technologies on their own. Some reasons were obvious – economic downturns, and geopolitical conflicts are convincing enough reasons to take NASA budgets away and limit the scope of future missions. There was also a good incentive to perfect these technologies with successive generations (ex. 3G à LTE à 5G).

Apart from good-natured international cooperation in the International Space Station, countries were not interested in sending more investment to space other than probes and scouting missions to Mars. These were and still are worthwhile pursuits. Every mile covered by the Mars Rovers unlocks new insights into how our universe was created. The reality is it doesn’t change much for life on Earth.

Following the successful test of the Falcon rockets, SpaceX ushered in a new era of privatized space. It’s important to note that without Elon’s personal wealth bankrolling four initial trials, and many government subsidies and partnerships with DARPA, we may not have ever gotten to the development of space infrastructure we have in place today.

Every administration since the second Bush administration has admitted that due to cybersecurity threats to Internet infrastructure, space technology is increasingly more important to national security, but needs to be created in a more cost-effective manner. These conditions give more reason (and ironically more money) to build a second generation of the space industry. That’s one reason the start of the New Space infrastructure is so noteworthy: it’s cheaper than ever before to send more people and things to space.

This means everything from satellites, rockets, telecommunications, pharmaceuticals, chips, green propellant, and radiation protection, you name it, is now viable for investment and optimization for space. If your tech can operate in space, you now have viable access to space.

Israel has an outsized position in the New Space industry, given its size. Israeli companies are at the forefront of the aforementioned sub-verticals. I’ve had the pleasure of working with seven Israeli space companies, who participated in a delegation tour across the Southwest and Western United States in August 2022. 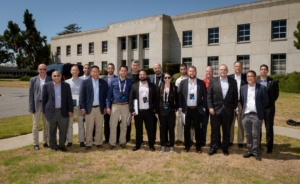 However, the list does not end at these seven companies, which represent a wide variety of subsectors in the New Space Economy. Israel’s space industry has good depth in each subsector as well.

For a country whose size has often been compared to the Great State of New Jersey, its public space agency has developed great ties with the international community since its inception in 1983. Two Israeli astronauts, both former fighter pilots, have flown in international missions. Ilan Ramon, the only foreign recipient of the US Congressional Space Medal of Honor, flew in the tragic Columbia mission.

The inflection point in Israel’s participation in international missions is encapsulated by Israel’s second astronaut, Eytan Stibbe, who flew in the Axiom Mission to conduct microgravity experiments, signaling an important first step in privatized missions to space.

This is where the rubber meets the road: if Israel can successfully partner in future missions like the Axiom missions, or even launch their own launch missions, they can use the model of public-private partnerships that the United States has benefitted from to become a space hub in the Middle East and Asia regions. In turn, the innovations made across all New Space verticals can improve life on Earth as well.

This is my parting thought: there are only sixteen nations who have developed government space programs. If the New Space economy does generate more than $1 trillion in revenue by 2040, then it stands to reason that the partnerships created by the Israel Space Agency and Israeli private space companies can capture at least $62.5 billion by 2040 if the New Space economy is neatly divided. It’s obvious that there will be winners and losers in the next twenty years, and an equal division of the economy is a fantasy. Nonetheless, Israel’s NewSpace Industry has the strength and depth to capture more than $100 billion if it partners early and often.

At the Israel Economic Mission to San Francisco, I will be planning a similar roadshow and delegation across the United States in 2023 for the Israeli NewSpace industry – if you are a U.S. partner and want to start developing ideas to connect with any Israeli company, do not hesitate to reach out to myself, and our partners.

About the Author
Aaditya Divekar, the Trade Officer for DeepTech, Telecom, HLS & Aerospace, is a Bay Area local with an academic background in international business and foreign policy.

Write to Aaditya Divekar at Aaditya.Divekar@israeltrade.gov.il

Brookings – The Promise & Perils of the New Space Boom